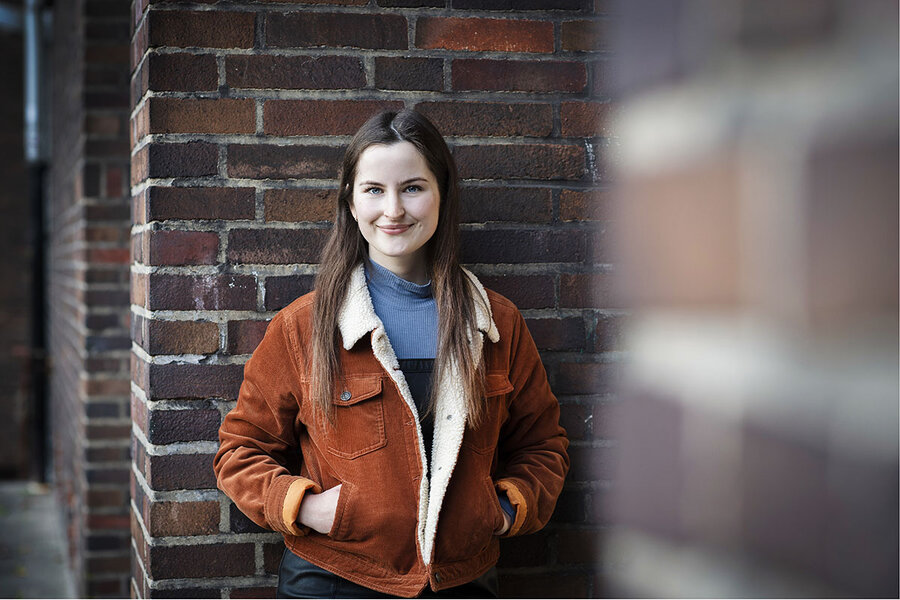 We have gathered across the Rhine from the State House here.

It was a cold October day – a cold German winter. I stood with three friends in a square, taped with plastic tape.

Normally, union demonstrations are crowded with people, arms waving, voices singing. It’s like a concert. We need to show employers that we have strength with our numbers. You can also have fun: Barbecues in the union house, songs; we’re all going to have a drink afterwards.

Why we wrote this

Cosima Steltner feels in solidarity with her fellow members of the German Metalworkers’ Union – a spirit that transcends pandemic restrictions. She is one of twelve 21-year-olds who have just started their careers that the Monitor presents in its interactive 21 in ’21 global report.

But it was the corona era: faces were hidden behind masks, bodies covered in winter clothes. Three thousand of us, standing in cordoned off squares six meters apart. You hear chanting, but you can’t see the mouths moving. We cannot tell who is speaking.

The work of steel is very special. It’s a lifelong job, a lifelong connection. The stakes are higher for steelworkers, and the industry is undergoing dramatic changes. They were placed in front of the crowd, near the stage.

I am not a metallurgist. I work full time in compliance at Thyssenkrupp, a German multinational steel and industrial engineering company. But I was elected to the union in the company when I was 17, and now I am also a volunteer organizer.

I devote hours a week to this unpaid labor organization. It has become the passion of my life.

I do not know why. I know I have the privilege of growing up in a part of Essen that was not the richest but not the poorest either: My parents are architects, and we took a vacation in a motorhome.

Maybe it’s because I’m empathetic. I cry a lot. When I see couples getting married on TV, I to feel their good fortune. When a child has no money to buy art supplies for school, I to feel wrong. Germany is a rich country and it doesn’t have to be like that. I fight for people who don’t like to talk or who don’t have a say in the job market. There are so many things to fight for.

Cosima Steltner, a steelworker union activist, snuggles up to her cat during a pandemic at her apartment in Essen, Germany.

It was a Kundgebung, a meeting. There were speeches, songs, funny posters. A Communist Party group was also present distributing leaflets, just five people standing with trumpets spewing spray cans all over the place as we all tried to stay safe!

Steelworkers have been through a lot in recent years. Everyone wants job security, but the future is uncertain with the transition to “green steel”. At this rally, the steelworkers called on the state government to buy shares in our company.

My greatest pride as a union organizer came in 2017 when we reached a collective agreement for fair hours and wages for Thyssenkrupp student apprentices. In Germany, more than 100,000 young people enter the program each year, and it is the main entry point into the labor market for many Germans. But we are not protected by most labor laws; you could work three to four years and still only earn minimum wage. It’s crazy.

I was part of the working group that won this historic agreement. I am asked all the time. Just two hours ago, an organizer from Hanover called me to ask me about a rule in the agreement.

As a teenager, I became an accidental union representative. I was recruited to run and won the election against the man who founded the representative youth council in my company. It was not good. I cried in bed; I really struggled. Should I decline the role?

But my mother said to me, “People voted for you. They trusted you. You can’t just walk away.

Union is now part of my life. I have just started a Masters program in Labor Studies – being accepted was one of the happiest times of the pandemic for me. Relatives and friends have warned me that the degree would qualify me as “untouchable” with “normal” employers.

And, I understand. “Normal” businesses will know that I have spent years fighting for employee rights. But I have to do it. The studies will give me a context for my work. Take the four day work week. I never want to be the person who just says, “OK, a four day week to save jobs.” I want to know everything: How do we make it work? What will Labor 4.0 look like? What are the long term changes in the industry?

Union work lives on personal contact. And the pandemic killed so many plans we had for 2020. Meetings, rallies, conferences.

During this October rally, the atmosphere was not the same as usual. No casual interactions with people you don’t know, no rushing through the crowd to say hello to your friends. I’m sure some friends came that I didn’t even recognize in masks.

Yet it was edifying because – despite the cold, the pandemic and only 3,000 attendants – people still cared to come. It’s about jobs and lives. Even friends who work in the automobile joined. This is what these demonstrations bring out: solidarity. That’s why I’ll always be on the streets.

Get stories that
empower and elevate Daily.

And that’s where I hope to be next spring. In our new round of negotiations, we are planning demonstrations in 155 cities in Germany.

Read more personal essays like that of 21-year-old Cosima in our 21 in 21 Global Report on a Generation Coming to Adulthood in the Pandemic.