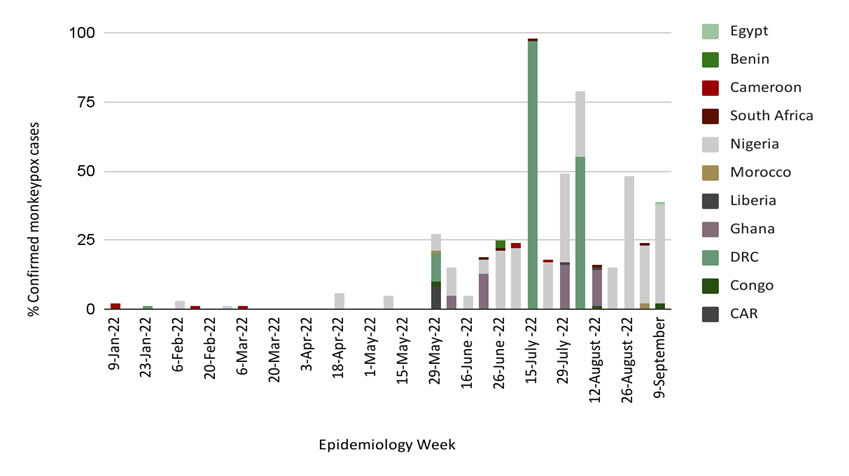 Global update (non-endemic countries)[1]: As of September 14, 2022, 59,179 confirmed cases of monkeypox and 136 deaths have been reported from 103 countries/territories worldwide. The countries reporting the majority of cases are mainly in Europe and North America.[2]

Benign: The West African Health Organization (WAHO) has reported three suspected cases and no deaths due to monkeypox. This is the same number of cases compared to the previous report. A total of six cases (3 confirmed and 3 suspected) and no deaths have been reported.

congo: The Ministry of Health reported 11 new cases (9 suspected and 2 confirmed cases with zero deaths due to monkeypox. This is an increase of more than 100% in the number of cases compared to the last report. Cumulatively 29 cases (5 confirmed, 14 suspected) and three deaths (CFR: 10%) have been reported.

Liberia: WAHO has reported 10 new suspected cases with no deaths from monkeypox. This is the same number of cases compared to the last report. A total of 33 cases (2 confirmed, 31 suspected) and no deaths have been reported.

The majority of cases reported by AU Member States are from the Central and West African regions, with DRC and Nigeria accounting for 79% of all confirmed cases reported (Table 1). Most cases were reported after the week of May 15 and this could be the result of increased surveillance in MS (Figure 1).

Table 1. Cumulative monkeypox cases and deaths reported in African Union Member States in 2022 – as of 14 September 2022.

Geoscope of events and levels of risk assessment

The Africa Centers for Disease Control and Prevention (Africa CDC) has conducted a preliminary assessment of the geographic scope (geoscope) and level of risk of reported monkeypox events in Africa and globally. Given that this outbreak is currently affecting multiple countries both on and off the continent, the Geoscope’s assessment is high. If other AU Member States report illness related to this outbreak, we will reassess and escalate accordingly. For the level of risk assessment, we considered the following criteria: morbidity and mortality of the disease, likelihood of spread within and to other AU Member States, and availability of effective treatments, vaccines or medicines. other control measures. We classified the level of risk as moderate given that monkeypox is not an easily transmitted and self-limiting disease with low mortality, which lacks effective treatment for those infected. We are monitoring the situation closely and will periodically reassess the risk.

Member States are invited to:

The general public is invited to:

[1] Global case and death counts include numbers reported in Africa.

[4] The high number of confirmed cases reported in the DRC during the week of July 15 is likely the result of cluster reporting.

2022-09-16
Previous Post: A Cork-based teacher and member of the SIPTU union pledges to continue his campaign to improve pay rates for childcare workers
Next Post: It’s fashionable to be syndicated to Vogue magazine – People’s World